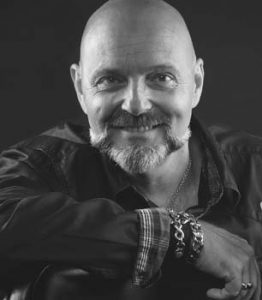 Marc’s humble beginnings are rooted in the Tool & Die industry, “My background is the reason why I am so detail oriented in my artwork. I am not afraid to try new styles and I have no limits.” His complex brush strokes portray a lifestyle of love, family and home with a bad ass twist. His subject matter turns a vision into an immediate emotional connection with his fans.

He has the unique ability to capture iconic legends in both his Motor Marc Art and his Music Fine Art. Whether his art portrays engine power and chrome, or rock ‘n’ roll and music passion, Marc’s works stirs emotions that define the cultural essence of contemporary modern art that can touch everyone at every level.

Lacourciere was born in Windsor, Ontario, Canada, just one mile from Michigan, in 1960. He discovered his true talent at the tender age of 10, when he had his first showing at the well-known Willistead Manor Art Gallery.

After graduating high school, Lacourciere became a toolmaker. While that paid the bills, Lacourciere was never far from his main passion – art. Several years later he decided that painting was the only thing he wanted to do, so the entrepreneur started his own business incorporating fine arts with advertising and promotion.

As the word spread of his unique talent, Lacourciere’s popularity in the motorcycle/automotive art world virtually exploded. Working closely with fortune 500 companies such as the Bradford – Exchange, Discovery Communications Inc. and many more, orders came flooding in; he knew he could no longer split his time between his art and his business. His passion and commitment to creating masterpieces won out, and now he dedicates countless hours to the most expressive paintings the art world has ever seen.

His meteoric rise to the top of the art world has driven Marc’s past works to dramatically rise in value and be highly sought after by collectors and enthusiasts alike. Look for this highly accomplished artist to continue to be a force to reckon with as he pushes the boundaries of artistic creativity.

A self-confessed “motor head” Marc has combined his love for high-tech machinery with an extraordinary artistic talent to create the ultimate expression of high-performance art. From Custom Motorcycles, Classic cars, and NASCAR™ to a nautical fantasy series featuring pirates and chrome treasure, all his work has been the subject of Marc’s artistic vision as he creates groundbreaking pieces showcasing these vehicles. As a licensed artist for notable Fortune 500 companies such as Discovery Communications, Easyriders, Indian Motorcycle and Fender Guitar, Marc’s reputation as a highly accomplished artist is known worldwide.

Motor Marc has gained international recognition for his art showcasing the wild machines from the hit television show American Chopper. He has also appeared on television programs and in magazines nationwide and his high energy persona compliments the wide variety of subject matter he portrays.

The artist’s latest creations series features legendary musical artists from the past several decades. These amazing paintings include many of the crowning names in Rock n’ Roll history. From The Beatles, the legendary Jimi Hendrix, and ZZ Top to a wide variety of musicians and bands. Working closely with the musicians, he has captured the very essence of the performers through precise expressions and truthful performance gestures.

Artist Marc Lacourciere is one of the world’s most sought after fine artists and has combined his passion for music with an extraordinary artistic talent to create the ultimate expression of musical performance art.

Artist Marc’s latest creations are a virtual cornucopia of sensory pleasures. This latest series features legendary musical artists from the past several decades. These amazing paintings will include many of the crowning names in Rock n’ Roll history, from The Beatles and legendary guitarist Jimi Hendrix, to a wide variety of musicians and bands. He has captured the very essence of the performers through precise expressions and truthful performance gestures. Each painting has been approved, scrutinized and critiqued for authenticity before they are released.

He has been featured on ABC, NBC, CBS, FOX, Speed TV, as well as a variety of high profile publications across North America, depicting his artwork on their covers as the most detailed and expressive artist in the industry.