ZZ-Top is an American blues-rock band formed in 1969 in Houston, Texas. They hold the distinction of being one of the few rock bands still comprising its original members after nearly four decades. They reached the height of their success in the 1970s and 1980s, after scoring many hit songs like, “Sharp Dressed Man” and “Gimme All Your Lovin’.” They continue to tour and release studio albums.

I had the opportunity of being present at one of their concerts. As a self-proclaimed motor head, I just had to include the hotrod in the painting and capture the fun they were having while performing on stage. For only three guys, they definitely put on a truly great and powerful show. 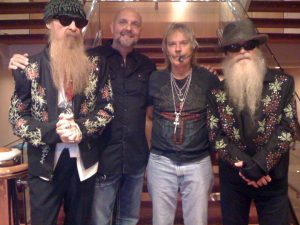